You can find all guides, tips and help with troubleshooting for a lot of apps and our own system here. If you have any issues, even with the help of our awesome guides, you can always submit a ticket and we will see how we can help you best!
If you use the search bar on the right you will also find forum threads and news items related to your query.

Why is my slot showing 100% RAM usage?
Technical

We get a lot of tickets about this so I wanted to make a quick post explaining all is fine! Also please make sure to look at the 3rd row down Real Ram that is the one that matters ! 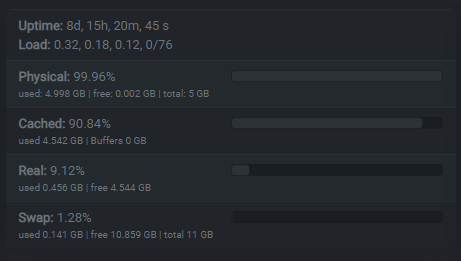 Linux is borrowing unused memory for disk caching. This makes it looks like you are low on memory, but you are not! Everything is fine!

Why is it doing this?

Disk caching makes the system much faster and more responsive! There are no downsides. It does not take memory away from applications in any way, ever!

What if I want to run more applications?

If your applications want more memory, they just take back a chunk that the disk cache borrowed. Disk cache can always be given back to applications immediately! You are not low on ram!

Do I need more swap?

No, disk caching only borrows the ram that applications don't currently want. It will not use swap. If applications want more memory, they just take it back from the disk cache. They will not start swapping.

How do I stop Linux from doing this?

Why does top and free say all my ram is used if it isn't?

This is just a difference in terminology. Both you and Linux agree that memory taken by applications is "used", while memory that isn't used for anything is "free". But how do you count memory that is currently used for something, but can still be made available to applications?

You might count that memory as "free" and/or "available". Linux instead counts it as "used", but also "available". This "something" is (roughly) what top and free calls "buffers" and "cached". Since your and Linux's terminology differs, you might think you are low on ram when you're not.

If you cannot find an answer in the knowledge base, you can contact us for further help.